“True there is Law, but there is Gospel also.” 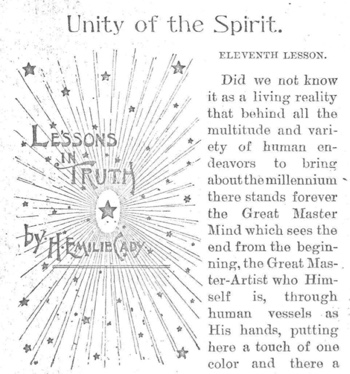 Lessons in Truth has 12 chapters. The final chapter used to be “Liberty or Bondage, Which?” but for many years Unity has shifted this chapter to the start of the book. That affects how we interpret what is now published as the final chapter, “Unity of the Spirit.”

In that case “unity of the spirit” is not about a social unity, but rather a unity of the soul. And, if that is how we approach it, then we will have a better understanding of the rich powerful statement she makes and is the title of this post: “True there is Law, but there is Gospel also.” This post is to elaborate on what I believe to be Emily Cady's original message.

Here is the original text of Unity of the Spirit, chapter 11 of Emilie Cady’s Lessons in Truth. Inserted into the text are audio clips from Vera Dawson Tait’s lectures. These two items, the text and the audio, combined with the Annotations from the Unity Correspondence School lessons, form an opportunity for self study of Unity’s first classic textbook in Metaphysics—what I call the Lessons in Truth Study Edition.

In the first third of the essay, Emilie Cady wants spiritual teachers to quit criticizing one another. She writes “I want to help you to see that there is no real wall of difference between all the various sects of the new theology except such as appear to you because of your circumscribed view.” Apparently the metaphysicians of her day (1895) were clinging to external differences and thereby showing their narrowness and ignorance. I’ll get to what those differences were later on.

For now, just note that Emilie Cady’s point is that when the metaphysician has a “consciousness of the presence of an indwelling God” then the differences (of metaphysics) all fall away. She writes in paragraph 12, “Beloved, as surely as you and I live, it is all one and the same truth. There may be a distinction but it is without a difference.”

In the middle third of the essay, Emilie Cady writes about the secret of metaphysical power. That secret is not the language one uses, nor the metaphysical concepts one has come to understand. The secret is available to the educated and the ignorant alike, to the heathen and the orthodox as well as the student of Truth. The secret, according to Emile Cady, is found in Matthew 6:22, “If thine eye be single thy whole body shall be full of light. No man can serve two masters.”

To illustrate her point, Emilie Cady praises an uneducated woman who overcame poverty and illness by means of keeping the “eye single.” Her language was unsophisticated but her consciousness was powerful when she ceased to recognize evil, but instead chose to “keep my eye single.” Emilie Cady concludes in paragraph 18, “Are you and I, with all our boasted knowledge doing anything more or different?”

Now what were those differences that the metaphysicians were arguing about in 1895? That is Emilie Cady’s focus in the final third of her essay. She writes in paragraph 26,

in these later days when we talk so much about Oneness, most Metaphysical teachers manage again to separate God’s children from Himself by saying that while one suffers the Other (God) knows no suffering nor does He take cognizance of the child’s suffering...

She continues in paragraph 28:

There is no necessity for us to separate God as Substance and God as tender Father; no reason why we should not, and every reason why we should, have both in One. They are One. God, Principle, outside of us, as unchangeable Law,—God within us as tender, loving Father-Savior who sympathizes with our every sorrow, who “knoweth our frame and remembereth we are but dust.”

Take note of what she is saying—that God outside of us as Principle is one with God within us as tender, loving Father (Mother). She says in paragraph 33,

I do not at all understand it, but in some way this indwelling One does move to lift the consciousness of His children up and place it parallel with God Principle, Law, so that no longer two are crossed, but the two, aye, the three, the human consciousness, the indwelling personal Father, the external Principle, God, are made One.

This is the true Unity of the Spirit—the oneness in consciousness of God as Principle and God as tender, loving Father-Mother. When the two are made one in consciousness, we have the the single eye that is so powerful. And when the unity of Spirit is achieved, then we will have an end to the unnecessary criticizing of the language and beliefs of another. This is the true language of Oneness.

Emilie Cady summarizes Unity of the Spirit by writing in paragraph 31:

True there is Law, but there is Gospel also. Nor does Gospel make law of none effect. It fulfills law. God is Principle, but God is Person also. Principle becomes personified the moment It comes to dwell in external manifestation in a human body.

My sense is that this essay is about both metaphysics and tolerance. Her metaphysical point is that God is both Principle and Person. Her tolerance and diversity point is that we each manifest a personified image of the transcendent God, that we don’t have all the answers, that we should honor the texts and testimonials that have been passed on to us and that we must be generous enough to allow and appreciate diverse expressions of sacred knowledge. As Emilie Cady says, “True there is Law, but there is Gospel also.”